On a hot summer’s day at a walking conference in Girona, Catalunya, Andrew Stuck is accompanying self-styled photo troubadour, Jez Hastings on a short stroll.  Jez has been known to walk to similar conferences, including a walk through Italy, Albania and Macedonia to reach a gathering in Prespas – walking long distances is in his blood.  They talk about why that is so, and how and why Jez has developed his practice of ‘a pace of purpose without purpose’, of making art through experiencing landscapes on durational walks, and in taking fewer photographs…27’31” 12.9MB

Andrew Stuck is in the company of Alex Middleton, one of the creators of Vespucci Adventures, that encourages people to put away their smart phones, to walk in the ‘great outdoors’.  He has come to Greenwich to walk around Andrew’s local neighbourhood and talk about how he and his co-founder have worked tirelessly over the last five years to build a business around a shared passion for walking.  It may be a passion, but as yet, it is not a profitable business.  The COVID pandemic brought trials but let them also develop the business in other ways, and Alex tells us what their plans are for the next five years, as well as offering some candid advice to anyone considering turning their walking passion into a business.  26’44” 12.5MB

Download notes of items mentioned in the interview with Alex_MiddletonDownload

Charlie Lee Potter has had a lifelong passion for working with sound especially in creatively weaving soundscapes to evoke places. As a former BBC radio journalist and foreign correspondent, she knows how the sound of a place helps to tell complicated stories and has applied this to a fascinating series of podcasts recorded on walks called “Inside a Mountain”. However there is a lot more to Charlie than just working with sound, as Andrew Stuck discovers on the walk they take across Christchurch Meadows in Oxford. 25’50” 12.1MB

Photographer Quintin Lake set himself a daunting challenge, to walk and photograph the coastline of Great Britain.  It is turning into an 8-year project, as he is now editing hundreds of photographs he has taken on the coastal walks, around what he has aptly called ‘The Perimeter’. Andrew Stuck catches up with him on a bright and breezy day along the Cotswold Way, a favourite local walk of Quintin’s. Although Quintin has spent five years solitarily walking, which he describes as ‘oneliness’, he is great company, and he tells Andrew about why walking and photography are so integral to his life,  and how there is a kind of creative magic in walking more and photographing less.  26’02” 12.2MB

Feature and portrait image: Tom Martin, all others: Quintin Lake

Download notes of items mentioned in the interview with Quintin Lake

Andrew Stuck is in Bognor, in West Sussex on a very hot day, walking around the University of Chichester campus with Andrea Vassallo. Andrea is completing a PhD with an installation in which gallery visitors will be able to experience walking beside him on a long walk. For Andrew, long walks tend to be 12 to 15 kilometres; for Andrea, he chose to walk from his home in Lancing (UK) to his childhood home on the outskirts of Venice (Italy) during the summer of 2021.

If you happen to be anywhere near Bognor in the first two weeks of September 2022, visit the installation and experience, falling in step with Andrea as he walks to Italy.

The conversation is about the walk Andrea undertook and why long distance walking is so important to him and (spoiler alert) we also cover details of the exhibition – the conversation opens with Andrea explaining how far he walked and how it took him. 28’47” 13.5MB

Download notes of items mentioned in the interview with Andrea Vassallo:

There are 19 long distance national trails in the UK and you are about to hear from Martyn Howe, a man who has walked each of them, but he hasn’t stopped walking, and he is now completing the newly designated English coast path.  So what got him going in the first place, and what kept him going, and what is his advice to anyone considering walking one or more of the national trails?  Andrew Stuck tries to keep up with him as they walk through Regent’s Park in London, as Martyn explains his mantra of beast, feast and yeast and how his endeavours got published in his book, aptly called the Tales from the Big Trails. 23’10” 11.1MB

Download notes of items from the interview with Martyn_HoweDownload

Fiona Hesse, is the guest curator of WALK!, the current exhibition at the Schirn Kunsthalle Gallery in Frankfurt that includes work from more than 40 international artists.  Recorded over a Zoom call, it was Andrew Stuck’s pleasure to learn more about Fiona’s own journey to becoming a curator, her enthusiasm for contemporary art, and in how she  undertook a PhD on walking artist, Hamish Fulton. Hamish was one of the first Talking Walking interviewees back in 2008.  Although the opening of the WALK! exhibition was delayed by COVID, some of the artists featured were able to include work they had created under pandemic restrictions. Fiona reveals some of the criteria used to select works, offers a useful working definition of walking art, as well as suggesting a couple of walking art practices for listeners to try. 24’51” 11.6MB

Hugh Lupton is a storyteller, living in East Anglia, who has been walking the lanes and ways of Norfolk learning stories through walking, and sharing them across the globe. We meet on a cold and windy day in April on one of his favourite walks, beside the River Bure, and talk about how people can value place in a different way if they have a sense of the narratives that are associated with it.

It is not the first time that Andrew Stuck and Hugh have met. Both of them took part in the Sideways nomadic art festival, that included a walk across Belgian Flanders in 2012. 20’27″ 9.6MB

Notes of items mentioned in the interview with:

“Peddars Way, A Walk with Chalk” is an illustrated book by landscape artist and long time Norfolk resident, Tor Falcon. Tor became intrigued by the Peddars Way described by some as Britain’s loneliest national walking trail. It follows a Roman Road for almost 50 miles from Thetford in the Breckland to Holme-next-the Sea. So taken with walking and drawing, Tor has gone on to follow and draw every river in Norfolk, and describes how during lockdown she’s also been chasing the moon. Between pandemic lockdowns Andrew Stuck caught up with Tor.19’11” 9.0MB 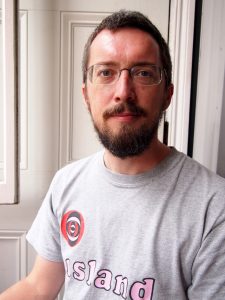