Children’s book illustrator and comic book artist, Lizzy Stewart, when drawing herself, draws herself walking – striding confidently across the urban scene. Her latest book, called “Walking Distance” is a personal account of the way she sees her life out and about on foot – she argues that walking is the ‘clearest way to participate in life’. Her work touches on themes of how women are observed in the city, both in reality and on film, as well as revealing insights into her creative process and her own ways of working. Recorded in and around the gardens surrounding the Horniman Museum in south east London on a February day in 2020. 22’08” 10.4MB

Download notes of items mentioned in the interview of Lizzy Stewart

Walking for 5 months and covering 2,000 miles across Europe from London to Jerusalem, the Just Walk marked the centenary of the Balfour Declaration in which the British Government announced their support for a “national home for the Jewish people” in Palestine. In this episode Andrew Stuck catches up with Justin Butcher, who conceived and led it, who describes the Just Walk as a ‘pilgrimage of penance’ and a ‘march of solidarity’. Crossing the Alps by the St Bernard Pass to north western Italy was rivaled in its beauty by the Albanian countryside. Accompanied by groups of walkers of different faiths and nationalities, a core group walked the whole distance, meeting refugees making journeys in the opposite direction, and being welcomed as celebrities by Palestinians. It is an extraordinary undertaking, chronicled by Justin in his best selling book entitled “Walking to Jerusalem”. The interview took place on a cold winter morning on the Parkland Trail, from Finsbury Park to Highgate Woods in London. 22’38” 10.6MB Feature image credit: Eleanor Butcher

Download notes of items mentioned in the interview of Justin Butcher

In 2020-21 Justin Butcher will be touring his critically acclaimed stage show, which premiered at Dublin Theatre Festival 2017, more details here.

Watch the 4-minute film of Just Walk to Jerusalem

If you are ever going to be caught out in inclement weather on the mountains or hills of northern England, having met Mark Reid, founder of Team Walking, Andrew Stuck can think of no other person he would rather have as his guide. Mark’s passion for the outdoors is only outshone by his desire to share it with others. He has written many guide books, led countless walks and facilitated workshops in the hills, and has notched up mountain leadership and training qualifications by the score. In this interview, we talk about creative thinking as Andrew has just joined one of Mark’s regular, seasonal ‘netwalking’ events with local businessmen and women in the Yorkshire Dales. However, the interview opens with Mark describing a recent philosophy walk that he co-devised with community philosopher, Graeme Tiffany, revealing how walking with others can take you in to deeper thoughts. 22’15” 10.4MB

Download notes of items mentioned in the interview of Mark Reid

On a visit to LISTEN: A Season of Sound Art taking place in Frome in Somerset, in the summer of 2019, Andrew Stuck participates in an immersive geo-located audio piece called ‘Walking Memories’. The piece has been composed by Phill Phelps and Ralph Hoyte, two of three partners who make up creative team Satsymph, who had been invited to use hours of recorded interviews from a Frome oral history group to create ‘Walking Memories’. Ralph and Phill, with their colleague Marc Yeats, have been making located media since 2004. Their latest work in Frome uses a hugely modified platform they call Satsymph QR with which they compose ‘spatial audio’ as Ralph describes it. For the interview, Andrew, Ralph and Phill are in a car park in Frome, a ‘sound pool’ within ‘Walking Memories’. The interview opens Andrew asking them both to explain a sound pool, and it is Phill’s voice that you hear answer him first. 19’19” 9.0MB

Download notes of items mentioned in the interview with Satsymph

Helen Ottaway is a musician and composer, and Frome resident for 22 years, who has been invited to curate LISTEN: A Season of Sound Art taking place in Frome from the 20 July until Sound Walk Sunday on the 1 September, 2019. In this episode, interviewed midway through the LISTEN, Helen explains how it came to fruition, its breadth of events taking place, and how she particularly wanted to include a listening walk and a geo-located sound walk. Helen herself, has been involved in creating sound art outdoors and is keen to include more walking in her future work.
21’24” 10MB

Listen: A Season of Sound Art runs until Sunday 1 September – check the programme of events here

In this extended episode, published to coincide with the Festival celebrating London becoming a National Park City, Andrew Stuck talks to Dan Raven-Ellison, the campaigner behind the initiative. Dan is far more than just a ‘one trick pony’ having spent a lifetime seeking ways of getting people, young and old outdoors into nature. He has also been exploring new ways of making it easier for people to understand the scale of increasing urbanisation and its impact on the natural world of which we are all part. A self-styled, ‘guerrilla geographer’, the conversation begins with Dan explaining what that means. 34’41” 16.3MB

Recorded in April 2019 in Walpole Park, Ealing in West London on a windy day in which the recording had to be stopped as planes passed overhead.

Within striking distance of Hebden Bridge, as dusk falls, accompanied by his dog Freda, radio producer, presenter and writer, Horatio Clare takes Andrew Stuck on a ‘slow walk’ close to his home in an area known as Hard Castle Crags.  The sky above us fills with insects and the birds and bats that feed on them.  Always alert to the nature that surrounds him, they don’t walk far before they stop, so Horatio can point out some creature Andrew had not as yet spotted and can’t identify.  In a candid conversation, Horatio shares his enthusiasms for slow walking and how it makes compelling radio listening, as well as talking about his writing about nature and travel, and how walking through the landscape are critical to his work. 25’45” 12.1MB

Peter Jaeger is Professor of Poetics at Roehampton University.  For over 30 years he has been

making pilgrimages to sacred sites around the world, keeping journals of his discoveries and walks.  Using these as source texts and drawing on literature and walking narratives, he has composed Midamble a long form poem of book length, in which he has held to specific structural constraints for more than 400 pages.  He compares writing long form poetry to walking long distances and during the discussion reveals how he structures the work in a rhythmical durational performance. 23’08” 10.8MB

Download notes of items mentioned in this interview with Peter-Jaeger 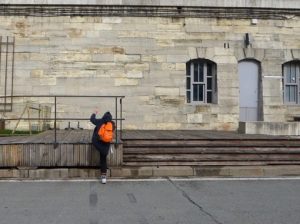 digital platform called “Placecloud”. Placecloud is all about animating the places through which we walk with place-specific recordings (‘placecasts’) written by writers, artists, scholars and everyday people. George maintains it is not a collection of audio tours, recorded in a studio by a dislocated actor, but instead numerous placecasts dotted across London, recorded by people like you and me in the very places we are observing and describing.  He spells out an intriguing and persuasive argument for why there’s an appetite for Placecloud and why he is convinced that it is going to be popular among us walkers. 19′ 24” 9.1MB

Download notes of items mentioned in the interview with George_Fort