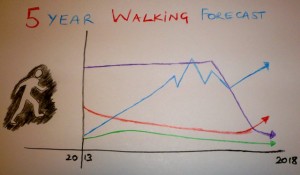 In 2013, Talking Walking celebrated its 5th anniversary. To mark this achievement, we invited thought leaders and those of us passionate about taking a walk, to give their predictions for walking in the next 5 years. They simply called a phone number and left a message on our voicemail that we recorded, edited and reproduced here as a recorded podcast.

We asked callers to answer these three questions:

Listen in or download predictions by clicking on the names below :

Jess Allen a dancer and walking artist from Aberystwyth researching walking in rural landscapes as an eco-activist dance practice. 5’04” 2.4MB

Terence Bendixson is the President of Living Streets, formerly the UK’s Pedestrian’s Association. He is a Senior Visiting Research Fellow at the University of Southampton in the Faculty of Engineering and the Environment, in 1974 he wrote a prescient book entitled “Instead of cars”. 3’23″ 1.6MB

Bill Chandler founded and convenes the Urban Design Forum which has recently celebrated 25 years of urban design in Australia, with Bill editing Urban Voices, a book reflecting on the work achieved and looking to the future. 5’57″ 2.8MB

Jacquetta Fewster is the Walking for Health Project Manager for MacMillan Cancer Support. Walking for Health is England’s largest network of Health Walk schemes providing opportunities for all kinds of people to become and stay active, including those affected by cancer and longterm health conditions. 3’38″ 1.7MB

Professor Dee Heddon, who teaches Contemporary Performance studies at the University of Glasgow, and researches performance in walking and forests. She is the co-creator of the Walking Library. 4’32″ 2.1MB

Heather Johnston a Development Consultant and Business Coach who works with clients, both individuals and organisations, to strengthen their mental capital and wellbeing.  She is increasingly using walking and art in her coaching work, as she believes the arts and creativity help to develop meaningfulness within people’s lives. 5’03″ 2.4MB

Jacky Kennedy – Founding Director of Canada Walks at Green Communities Canada, a walking advocate from Toronto who has been working to encourage walking for more than 15 years.  Her current work is around setting up a national school travel plan framework for Active and Safe Routes to School in Canada. 2.6MB 5′ 28″

Henry Mellor is a former social worker and now a Makaton tutor, helping parents and carers to improve the communication skills of children with learning disabilities.Henry’s forecast is that if people could be rewarded tax credits for reducing their carbon footprint, then many of us would walk more. 3’55″ 1.8MB

Idit Nathan and Helen Stratford are two visual and live artists, developing work about the urban spaces around us and how different audiences react to them in playful and performative ways. They believe that playful walking is a means by which citizens can reclaim their cities from the onslaught of modern profit-driven developments. 7’44” 3.6MB

Geoff Nicholson – best selling author of some dozen and more novels including “Bleeding London” in which one character walks every street in London. He has written two acclaimed non-fiction books around his life-long passion for walking: “Lost Art of Walking” and “Walking in Ruins“.  Sheffield-born and bred, Geoff now lives in Los Angeles, California one of the places where you are least likely to see a pedestrian. 5′ 21” 2.5MB

Tim Ridley who led a series of group walks across Epsom and Ashtead Commons called Art Walks 2013.  Tim believes that walking opens up the mind, that human perception and intellect work best at 3 miles per hour. His forecast is as much a hope as a prediction, that people will give up their cars to walk more to accomplish their everyday errands, and in turn, over time benefit from healthy exercise that enhances their wellbeing. 4’14” 2.0MB

Dieter Schwab is Chair of the Austrian Federation of Pedestrians (walkspace.at) who believes it will be in those places that offer the best infrastructure for walking, where one will see significant growth in walking. 4’32″ 2.1MB

Ryan Snyder is a transportation planner based in Los Angeles California.  In conjunction with a number of authors, he has coordinated the publication of a street manual called the Model Design Manual for Living Streets, a template that is being adapted by hundreds of towns and communities across the States, helping them to realign their transportation policies putting people rather than vehicles as their key priority. 4’24″” 2.2MB

Ole Thorson is a former President of the International Federation of Pedestrians.   Measuring pedestrian mobility and use of sidewalks and crossings, will become more prevalent in traffic management and infrastructure projects in cities in the future, according to Ole, who firmly believes that such data will provide the necessary evidence for improved mobility for pedestrians, and fairer share of highway space, not just in our cities but in rural areas too. 7’54″ 3.6 MB

Stefan van der Spek is an Associate Professor of Urban Design and Director of the Geomatics Educational Programme at Delft University of Technology in the Netherlands, in their Faculty of Architecture & the Built Environment. His research includes tracking people on foot using GPS receivers, following them through shopping and town centres, to visualise how they use the built environment. 4’43” 2.2MB

Elizabeth Wrigley runs Core Connections, working with clients in urban design and masterplanning.  She always takes clients out and about on foot to observe an area.  Her forecast  was prompted by listening to that of Geoff Nicholson, Sheffield born author now Hollywood resident whose forecast you can listen to  as well on Talking Walking. 3’57″ 1.8MB Back in our early days we asked self-styled walking artist Hamish Fulton to give us his prediction for walking 5 years hence: he thought that as more than half the world’s population would be living in cities, that there must be a huge future for creating walking routes in cities – not by spending money on infrastructure but merely by documenting more unusual routes that encouraged habitual everyday walking – you can listen here to the whole interview.

“Your face, your race, the way that you talk, I kiss you, you’re beautiful, I want you to walk – We’ve got five years…“