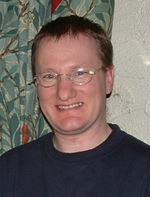 John Davies a Church of England vicar in Norris Green, Liverpool talks about his walk beside the M62 from east to west which he undertook in 2007.

Download notes of items mentioned in this episode: John Davies