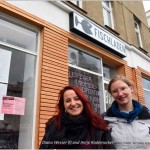 The Leipzig City Quarter Expeditions is an intriguing walking art project which debunks prejudices about urban neighbourhoods – we all have heard of a notorious neighbourhood in one or other city, and Leipzig’s Eisenbahnstrasse had notched up infamy as “The worst street in Germany.” Diana Wesser and collaborator Antje Rademacker, both living in Leipzig devised a project in which residents of such neighbourhoods had a chance to tell their stories about living in these places, revealing just how different actuality is from perception.

Baking and exchanging cakes are key to residents collecting and sharing stories about where they live – so entranced were some that they openly invited visitors into their homes, workplaces and lives.

The interview is recorded at the Vienna Walk 21 Conference in October 2015, at which Diana collected a Visionary Award.  21’10” 9.9MB