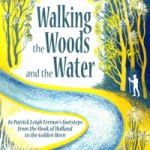 STOP PRESS – soon to be published by indie publisher Paradise Road in Autumn 2018 is Nick’s study of parakeets in London – you can get a taste of it in this article that Nick wrote.